TheBlackmagic Design portfolio - represented on the Czech and Slovak market by Syntex - includes a new, affordable ATEM Mini ProISO overhead with up to 5 tracks of video recording (4x inputs, 1x output of the show) and the ability to re-edit the footage after the show has finished airing. It provides users with clean recording of all inputs for later offline editing via multi-camera editing features. The ATEM Mini Pro ISO also stores all audio tracks, graphics, and the DaVinci Resolve project for maximum ease of post-production!

ATEM Mini overheads make it easy to create live shows for e.g. YouTube and professional corporate presentations using Skype or Zoom, with up to four camera inputs or the ability to incorporate the output of a game console or computer, such as a PowerPoint presentation, into the show. Integrated effects functions allow the creation of blending effects or picture-in-picture shots, for the creation of continuously annotated videos, etc.

All models of the ATEM Mini series have a USB interface operating in webcam mode for streaming programme output and an HDMI output suitable for previewing on TVs and projectors, for example. The ATEM Mini Pro models also allow the use of the USB interface for recording to USB drives.Microphone inputs allow the connection of microphones for recording interviews and commentary presentations. 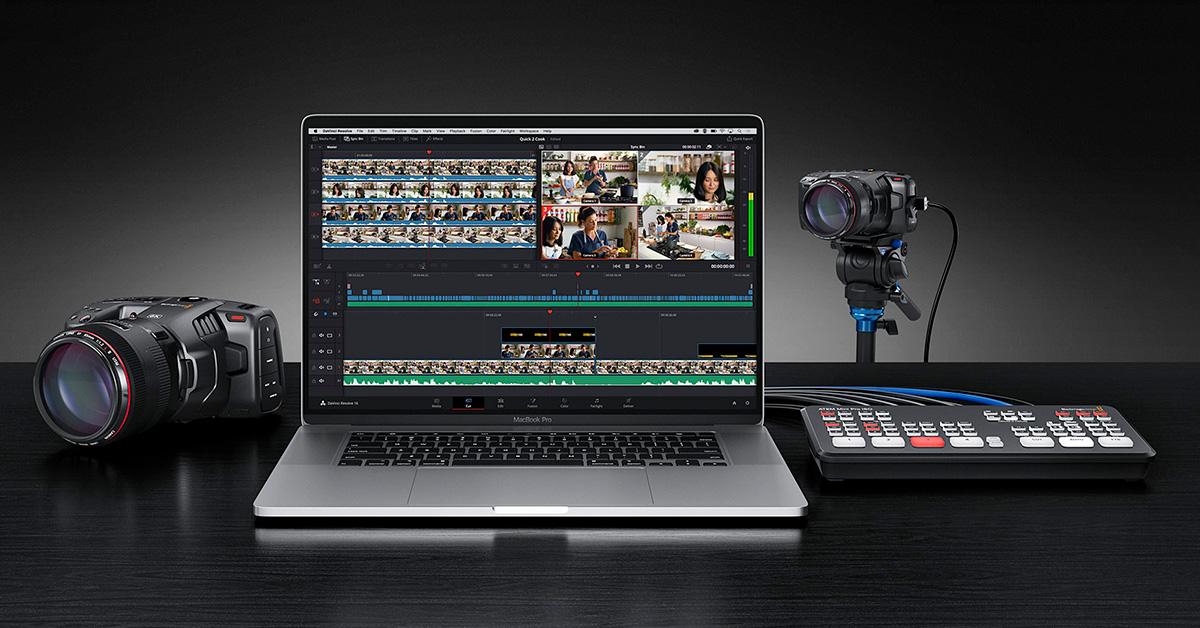 The ATEM Mini Pro ISO option allows for post-production of live shows by simultaneously recording five tracks of video, i.e. all four unedited inputs and the show's output, including metadata and timecode. Used still images are also stored along with the videos. Users can thus easily edit an already aired programme with colour corrections, effects and new graphics. The audio side of the show is recorded as well, for subsequent audio post-production

ATEM Mini Pro ISO is also able to save the project in DaVinci Resolve format, so it can be opened afterwards with a single mouse click! The project file preserves all edits, blending effects and still images. This makes it easy to edit edit tracks or replace them entirely using DaVinci Resolve's Sync Bin feature for multi-camera editing. For Ultra HD project transformation and maximum quality color correction, recorded tracks can be replaced with the original Blackmagic RAW videos from the cameras.

ATEM Mini modes represent a new benchmark in ease of use: users switch between video sources by pressing buttons 1 to 4. Normal editing (by pressing the Cut button) or effect blending (Auto) can be selected. In Auto mode, normal blending, or blending-into-color effects and TWO effects á la image offset can be selected. Of course, you can quickly select the position of the image in "Picture in Picture" mode.

With four independent HDMI inputs, up to four video sources including professional cameras can be handled. Synchronisation at the inputs ensures seamless compatibility with all common video sources, e.g. when working with unfamiliar equipment in new workplaces. Concerts, social events, theatre performances and other shows can be easily filmed with professional digital film cameras!

The ATEM Mini Pro models also include a hardware encoder for live streaming shows via an Ethernet interface. This allows streaming to platforms such as YouTube, Facebook and Twitch, in high quality, without the risk of dropped frames and with a simpler configuration.The ATEM Software Control application offers a number of functions for setting up the stream, and a preview of the broadcast status is also displayed on the multi-view output including the bitrate.

The ATEM Mini variants also support direct recording of the streamed video to USB drives. This allows long recordings - in the same H.264 format with AAC audio as the streaming - as well as subsequent upload to other online video platforms such as YouTube and Vimeo. ATEM Mini Pro models support endless sequential recording to multiple drives connected e.g. via a USB hub or Blackmagic MultiDock product. Recording settings and disc selection can be made using ATEM Software Control; multi-view output shows the recording status.

Each of the 4 HDMI inputs is fully synchronized and automatically converts 1080p, 1080i and 720p signals to the current overhead resolution. In the Program/Preview operating mode, the HDMI output can preview the output from the cameras or the show being produced, the ATEM Mini Pro model also offers a multi-view output.

The free ATEM Software Control app unlocks the hidden power of ATEM Mini! It allows you to fully configure all overhead functions via USB or Ethernet; the network interface also allows multiple users to connect. The integrated media library can be used to import up to 20 static RGBA images from ATEM Software Control for logos, captions or splash screens, or graphics can be imported from Photoshop with the included plug-in.

The ATEM Mini models are ideal for processing news programs and presentations thanks to the ATEM Advanced Chroma Key tool for color keying, i.e. removing the (typically green) keying background. This feature can also be used to remove the background for captions and other graphics.

For more complex productions with a large number of cameras, it is necessary to view all the output from the cameras and other video sources together, on a single monitor. ATEM Mini Pro models offer professional multi-view output to preview all four video inputs and Program and Preview on a single monitor or HDMI TV. Each of the camera previews also displays a title, audio meters and a tally indicator. The multi-view preview also displays the media player, recording and streaming status, and the Fairlight virtual mixing console.

With the Fairlight virtual mixing console, the ATEM Mini overheads allow you to mix 12 channels from all audio inputs. Each channel can be independently adjusted with a six-band parametric equalizer, compressor, limiter, expander and noise gate.