The Blackmagic URSA Mini Pro 12K is the initial shot of a new digital film revolution with an all-new 12K Super 35 sensor with a dynamic range of 14 apertures integrated into the popular URSA Mini series body! By combining an 80MP image sensor, new image processing algorithms and the flexible Blackmagic RAW format, recording 12K footage becomes a reality. When resampled to 8K and 4K resolutions, users can get fantastic footage with uncompromising levels of detail and true-to-life skin tones, comparable to the output of professional cameras. The camera allows shooting at up to 60 fps in 12K, 110 fps in 8K and up to 220 fps in 4K (Super 16 size cutout). The URSA Mini Pro 12K features a PL mount, integrated ND filters, CFast and SD/UHS-II media recording slots, and a powerful USB-C interface.

The resolution of the URSA Mini Pro 12K far exceeds the capabilities of conventional film. It offers users a comparable level of detail, wide dynamic range and rich colors. It is ideal for feature films, TV series or large-format (IMAX) productions. Its uncompromising resolution also makes it more than suitable for shooting effects shots against keyed backgrounds. Resampling to 8K or 4K resolution ensures great texture and colour, as well as very smooth transitions thanks to the absence of aliasing artefacts. 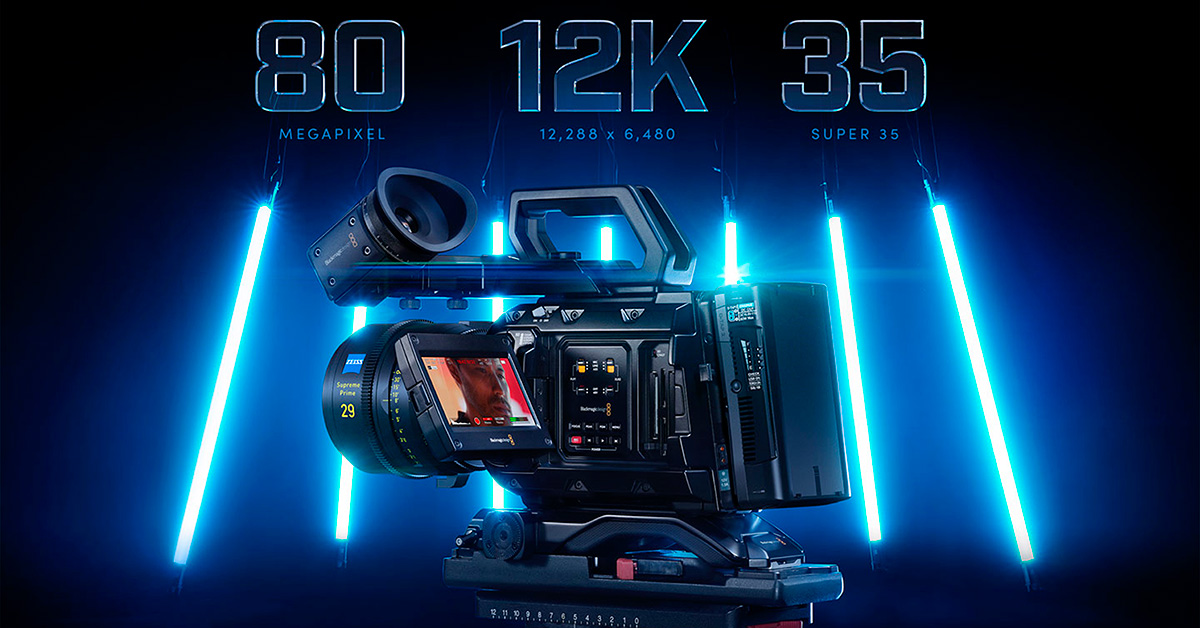 The Blackmagic URSA Mini Pro 12K features a revolutionary new image sensor with a native resolution of 12,288 x 6,480, an incredible 80 megapixels per frame. The sensor has a Super 35 size, 14 aperture dynamic range numbers and a native ISO of 800. It captures equal amounts of red, green and blue pixels simultaneously and is optimized to work in multiple resolutions: you can shoot at 12K resolution at 60 fps or record to 8K or 4K RAW material at up to 110 fps without cropping or changing the angle of view. And thanks to the interchangeable bayonet, you can use the full range of modern film and vintage lenses to take full advantage of their optics!

Only the Blackmagic RAW format allows you to record 80MP, 12-bit images at up to 60 fps! Constant Quality Q0 and Q5 settings, along with the new Q1 and Q3 modes, guarantee constant quality with adaptive compression levels. Constant Bitrate mode (5:1, 8:1, 12:1 and now also 18:1) has been designed for maximum image quality at a predictable, constant file size. RAW data can be recorded simultaneously to two cards at the same time, allowing you to shoot 12K or 8K high frame rate material on both CFast and UHS-II media types. Blackmagic RAW format preserves camera metadata including information about the lens used, white balance, LUT corrections, etc. for the most consistent output from shooting to final post-production.

12K material ensures the highest level of detail and color for post-production. Subsequent resampling can produce a highly detailed 8K image, without aliasing. In addition, the Blackmagic RAW format supports working directly in 12K resolution, thanks to highly efficient optimizations, support for multiple CPU cores and GPU acceleration (Apple Metal, CUDA and OpenCL)! This allows users to work directly with the footage without generating proxy files.

Blackmagic Design's fifth generation of image processing algorithms includes a new film transfer curve that better utilizes color data from the new sensor. The result is even higher quality color rendition, skin tones or highly saturated colors (neon signs, car brake lights, etc.) not excluded! Blackmagic RAW preserves the wide dynamic range and colour response of the sensor thanks to metadata that can be used for further processing of the footage.

Most projects require the use of a wide variety of lenses, so the URSA Mini Pro offers interchangeable bayonet mounts for different standards. The supplied PL can be quickly and easily swapped for a Canon EF or Nikon F mount, and a B4 mount is also available for the URSA Mini Pro 4.6K G2.

Blackmagic URSA Mini Pro cameras are equipped with a modern USB-C interface; for the 4.6K G2 model it is the USB-C 3.1 Gen 1 variant with transfer speeds up to 5 Gbps, and for the 12K variant it is USB-C 3.1 Gen 2 supporting transfer speeds up to 10 Gbps! The bus can be used to connect external drives - such as the new version of the optional Blackmagic URSA Mini Recorder accessory - for recording to fast, high-capacity SSD media. The NVMe SSDs allow the camera to take full advantage of the camera's capabilities and record Blackmagic RAW files at 12K resolution with Q0 settings, or record videos at very high frame rates. When you're done shooting, just unplug the drive, transfer it to the editing room and start editing immediately, without copying.

The new model of the optional Blackmagic URSA Mini Recorder external recorder enables recording of 12-bit 12K Blackmagic RAW files to powerful 2.5" SSD drives, including the latest generation of U.2 NVMe media. These drives are extremely fast and easily achieve transfer speeds of up to 900 MB/s for recording 4K, 8K and 12K Blackmagic RAW material at the highest Q0 quality. The recorder mounts to the rear panel, between the Blackmagic URSA Mini Pro 12K camera and the battery, and connects via a fast USB-C interface.