for editing and post-production of audio/video material. DaVinci Resolve 17 is a major update with more than 300 new and improved features including tools for colour correction of HDR material, redesigned functions for primary colour correction, new generation of Fairlight technology for audio editing allowing to work with up to 2,000 tracks in real time, new options for media bin sorting, etc.

The public beta of DaVinci Resolve 17 is available on the Blackmagic Design website. 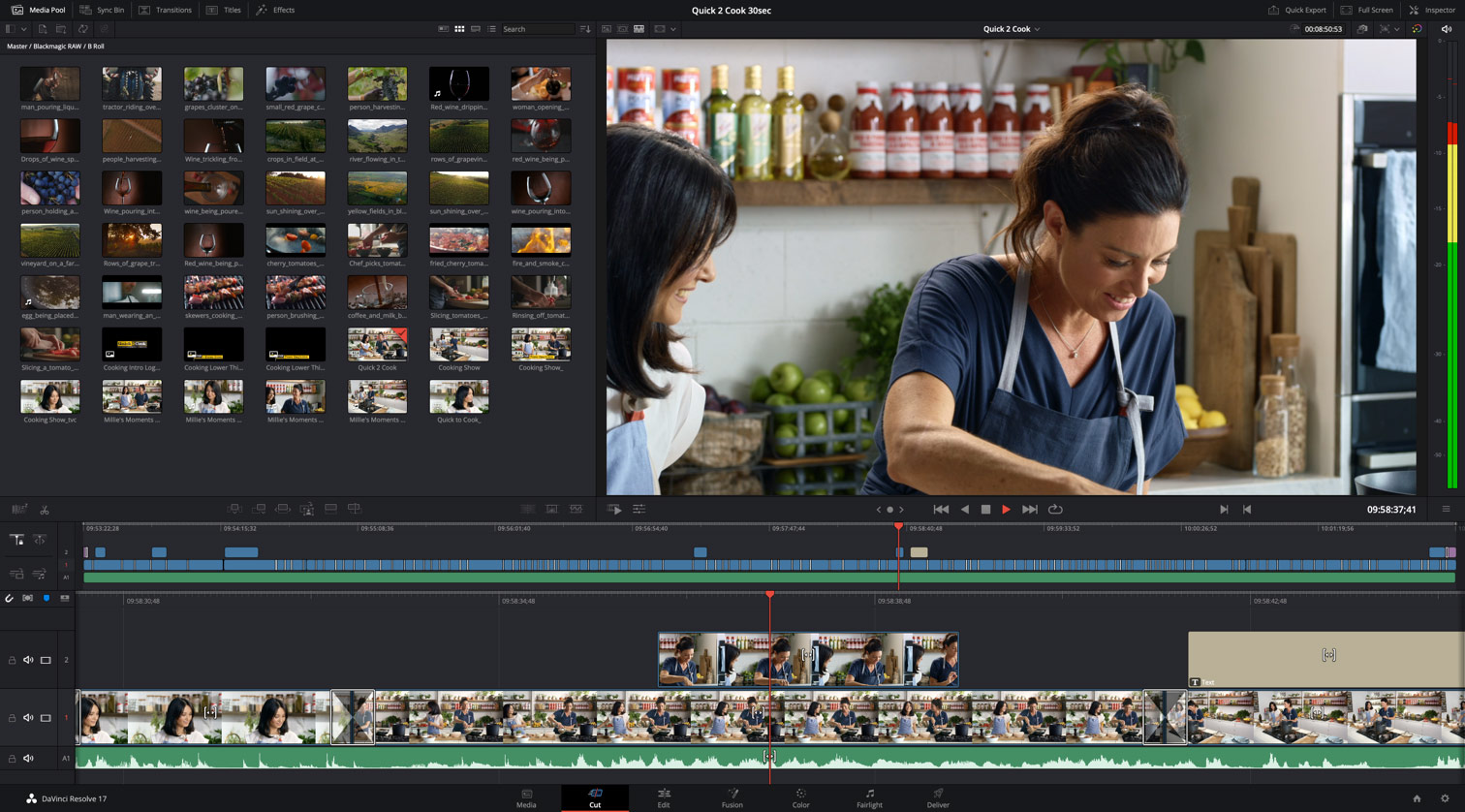 DaVinci Resolve 17 is a major update bringing over 100 new features and over 200 enhancements. The Color section for color correction includes new features for processing HDR videos, redesigned tools for primary color correction, automatic masks based on artificial intelligence algorithms, and many more new features! The Fairlight section offers optimized features for creating selections using keyboard and mouse, as well as the new Fairlight Audio Core architecture including new FlexBus technology supporting over 2,000 tracks. The video editing sections have been enhanced with new metadata displays, zooming on audio tracks for more accurate editing, automatic shot recomposition features, and other new features. You can also now use the Fusion section compositions as subtitles or blending effects in both the Cut and Edit sections, for example.

Version 17 also brings considerable simplification in the area of selective corrections of human silhouettes. The Magic Mask tool uses the DaVinci Neural Engine core to automatically create masks of entire characters or body parts. Of course, it is possible to manually adjust the mask afterwards, as well as automatically track the movement of the target subject.

Fairlight section
DaVinci Resolve 17 introduces the largest update in the history of the Fairlight section for audio post-production. The audio track editing features have been upgraded along the lines of the Fairlight Audio Editor, as well as the Fairlight Audio Core itself, making better use of the capabilities of the CPU and the optional Fairlight Audio Accelerator card. The result is the ability to process up to 2,000 audio tracks in real time including equalizer, dynamics and up to 6 plug-ins per track! And the new FlexBus architecture introduces up to 26 channels of wide, versatile buses that can be independently layered and linked to process even very demanding projects in a straightforward manner.

The new Transient Analysis tool is able to detect single words of dialogue tracks, percussion instruments or sound effects. The result is vertical markers in the audio track view that can be easily navigated with the cursor keys, making subsequent editing much easier.

Fairlight Audio Core and FlexBus technologies allow large projects with thousands of tracks to be processed on a single workstation. In the past, processing similarly complex jobs was only possible with several linked computers. DaVinci Resolve also offers features for multiple users to collaborate on the same project, including a Fairlight section.

Cut section
The new Cut section for fast cutting of video material guarantees even more efficient work with imported material. A new metadata display in the bin simplifies file sorting based on scenes, shots, cameras, etc. In conjunction with the Source Tape function, this is the fastest way to select material for cutting.

Also new is a larger display of audio tracks during editing, or a function for fast conversion of 16:9 HD or Ultra HD material into square or vertical format for social networks (Instagram, etc.). The DaVinci Neural Engine core automatically identifies faces and changes the shot composition according to the target format.

Searching for effects, interlaces or captions is also now faster thanks to the simultaneous display of multiple icons. To preview an effect in the Viewer window, simply hover your cursor over any item in the effects list...

You can also now import projects created with ATEM Mini Pro ISO and further edit them using the Sync Bin function with multiview display. Of course, you can use imported HD ISO footage or original Blackmagic RAW files from cameras to complete your project in Ultra HD resolution.

Edit section
Among the enhancements to the Edit video editing section are especially new features for creating and managing independent proxy media, for example for easy project portability or performance enhancement. Proxy files can be saved at resolutions up to 1/16 of the original resolution and in H.264, H.265, ProRes or DNxHR codecs. They can be created internally or externally using third-party tools.

The new Auto Align tool can be used to synchronize multi-camera sequences according to both time code and audio track content. In addition, time tracks can be converted into multi-camera and composite clips.

The new HSL and Luma Keyer Resolve FX 3D plug-ins allow direct color/luma keying of material in the Edit and Cut section timelines. Alpha channels of Resolve FX and Open FX plug-ins, integral alpha channel files and external files serving as masks are also supported. The Render in Place command is then used to calculate any portion of the timeline.

Before the material is inserted into the timeline, it can now be pre-edited - e.g., setting RAW parameters, adding LUT corrections, changing audio tracks, image size and frame rate, etc. Users can also import/export individual timelines or bins for wider collaboration possibilities within studios. Timeline and bin files can be easily shared, e.g. via email.

Working with half-shots has also been improved - DaVinci Neural Engine technology is able to reconstruct progressive images from half-shot material or remove 3:2 pulldown in real time.

Fusion section
Post-production Fusion section compositions can now be saved as templates for use in Edit or Cut sections, with which timeline markers can now also be shared. New animation curve modifiers find use when changing the length of sequences. And the ability to view/play audio tracks will make it easier to accurately time animations.

In addition, 27 GPU-accelerated Resolve FX effects have been implemented, including noise reduction or image focus functions taken from the Color section. Bookmarks at the tree structure view will simplify working with large projects; as well as the ability to vertically display the nodal structure. New toolbar customization options allow you to create customized tool templates for different purposes.

Other improvements
DaVinci Resolve 17 includes additional improvements in the areas of format and export support, consistent timeline browsing functionality across all sections of the program, better metadata support, new algorithms for resampling an image when zooming in/out, the ability to share Smart bins, GPU acceleration for other Resolve FX plug-ins, etc. Another major new feature is the implementation of revolutionary multi-user collaboration features in the free version of DaVinci Resolve!

Availability
The public beta of DaVinci Resolve 17 is available on the Blackmagic Design website.

Photos for print
For photos of all Blackmagic Design products, visit www.blackmagicdesign.com/press/images.