HyperDeck Extreme features the trusted reliability of HyperDeck combined with new innovations such as space saving H.265 files, optional internal cache, 3D LUTs and HDR support. With the ability to record up to 4K in H.265, customers get reduced storage costs and amazing image quality. The large touch screen ensures a perfect view of their recording as well as control over all deck settings. Customers can then add HyperDeck Extreme Control to transform it into a traditional broadcast deck. This means HyperDeck Extreme is the perfect solution for the next generation of broadcast, live production and digital signage. 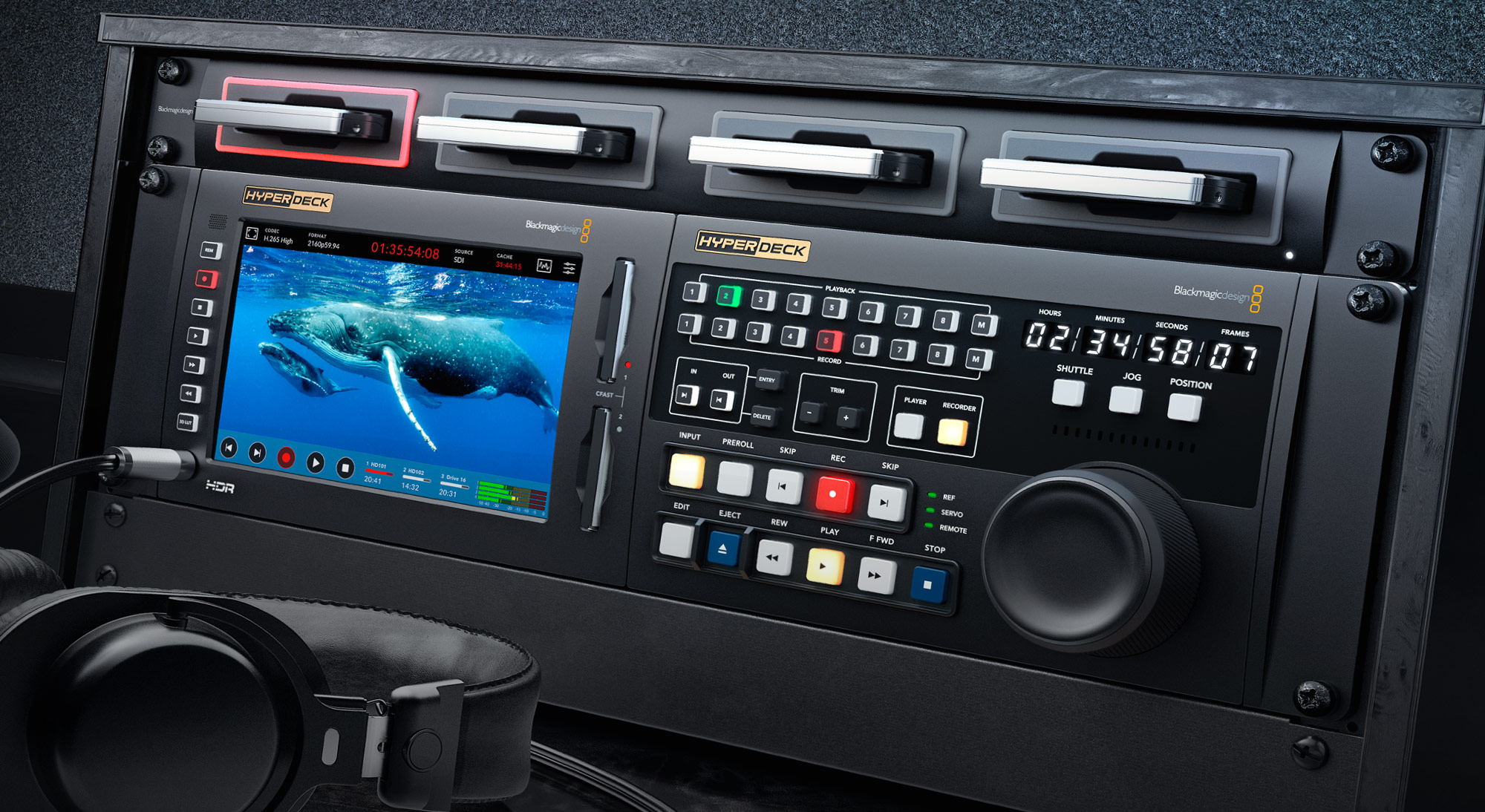 HyperDeck Extreme has an innovative touch screen user interface with deck controls as well as a large screen to view their recording. HyperDeck Extreme also includes 2 media slots, 12G-SDI, analog connections for archiving, USB-C external disk recording, plus a front panel speaker and headphone jack. There's also an optional cache that eliminates dropped frames if their media becomes full or is too slow. Both AC and DC power connections are also included for studio or on location use.

With its amazing versatility, HyperDeck Extreme is also great for live production as a master recorder, clip player and for recording ISO cameras. The analog inputs allow customers to record from old video tapes, so legacy programming can be used on the latest streaming services or for use in editing. Digital signage is easy with HyperDeck Extreme as it has 10G Ethernet for fast media uploads, plus it features a simple remote control protocol. Customers can even use it as a field recorder as it includes HDMI, SDI and analog inputs with built in scopes and 3D LUTs. The scopes also help customers QA masters to ensure compliance with broadcast standards before streaming and broadcast.

The innovative touch LCD user interface provides incredible control. On screen, there are dedicated buttons for play, stop and record, plus a mini timeline for scrolling through their recordings. The LCD includes a heads up display of timecode, video standard, media status as well as audio meters. Scopes can be enabled via the touch screen as well as focus and exposure assist. There's also an extensive range of settings all controlled from the large LCD. Plus customers can load and save 3D LUTs.

CFast media support allows customers to record to commonly available flash memory cards. The H.265 files are small enough to allow long recordings on standard CFast cards. Plus there are 2 CFast card slots so customers can swap out any full cards even during recording, allowing infinite length recording.

Sometimes their media can fill before customers change to a blank card, or if the card is too slow, then customers can get dropped frames in their recording. To eliminate this problem, customers can install a PCIe flash disk into HyperDeck Extreme to use as a record cache. This eliminates problems with CFast media or external disks, as the cache will automatically take over and record any content the media could not capture. Even if a card fills, recording will continue to the cache until it’s swapped.

HyperDeck Extreme features full internal waveform monitoring so customers can ensure compliance to broadcast standards when used on high end work. The waveform display provides a traditional luminance (brightness) levels view of their input or playback signal. The vectorscope display allows customers to see the intensity of color at 100% SDI reference levels. Customers also get RGB and YUV parade displays which are ideal for color correction and checking for illegal levels. Histogram shows the distribution of white to black detail in their images and highlights or shadows clipping.

H.265 files are extremely small and range from 60:1 to 285:1 compression ratios which means much lower file sizes. Plus H.265 is now supported on all major operating systems. HyperDeck Extreme even supports Apple ProRes 422 HQ, ProRes 422, ProRes 422 LT for recording and playback plus ProRes 4444 for playback to fill and key out. This means files will be compatible with software such as DaVinci Resolve, Media Composer, Premiere Pro or Final Cut Pro X.

With 10G Ethernet, HyperDeck Extreme is perfect for digital signage because remote uploads are extremely fast. It uses an easy text based protocol plus customers can use Telnet to test control commands. To upload media files remotely, customers can use FTP, or even use simple FTP client software. When the ethernet protocol and FTP is used with large USB-C disk arrays, HyperDeck Extreme becomes a great broadcast server for ingest, media management and play out.

Availability and Price
HyperDeck Extreme 4K HDR will be available in April 2022 for 2795 EUR ex. VAT.

Press Photography
Product photos of the HyperDeck Extreme 4K HDR, as well as all other Blackmagic Design products, are available at www.blackmagicdesign.com/media/images.