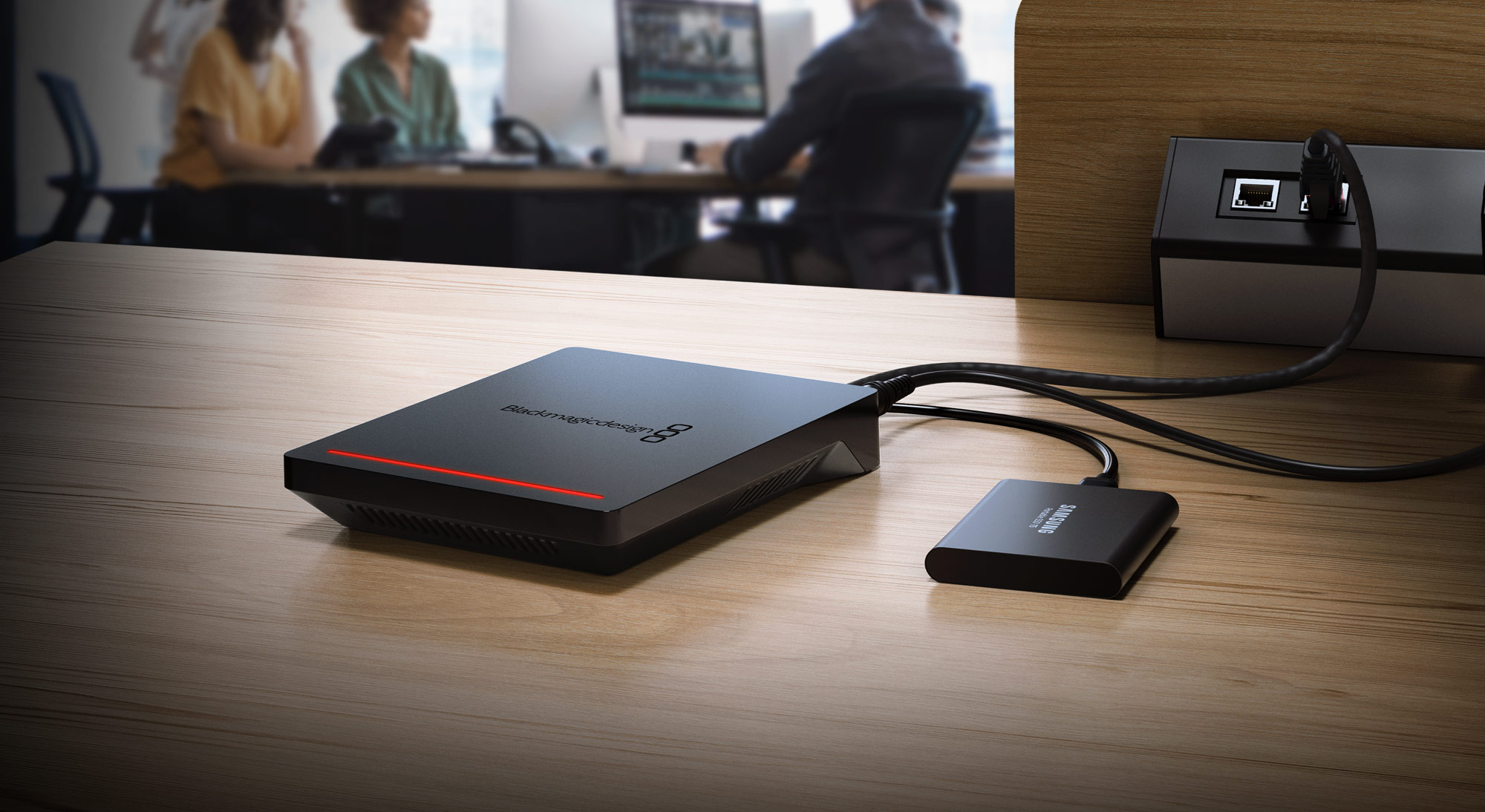 Blackmagic Cloud Pod features an extremely small and thin design because it doesn't have any storage internally. It’s also very quiet and very portable. It features two USB-C ports so it can host two separate USB disks on their network at the same time. The 10G Ethernet port means customers get extremely high performance. There is also an HDMI monitoring output so customers can watch a live graphic view of the storage operating on a TV or monitor.

Now customers can setup a local cache of their Dropbox files. This makes working much faster because files are instantly available without needing to be downloaded from the internet. Customers can save space on their computer by moving cached Dropbox files to the Blackmagic Cloud Pod so everyone on their network can share them. Customers can even sync multiple Blackmagic Cloud Pods or Cloud Stores via Dropbox so people in different geographic locations can collaborate without latency because everyone has a local copy of the files.

The most exciting feature is the HDMI monitoring output. Simply connect a TV or computer monitor to get a live status of the Blackmagic Cloud Pod. The storage map shows a graphic representation of the memory core and real time read and write access happening for the connected users. There are also graphs that show customers the data transfers on the Ethernet connection. The main space indicator shows customers the capacity of the two USB-C disks and how much is currently being used. The status for each Dropbox connection is also shown.

The Blackmagic Cloud Pod has a high speed 10G Ethernet port, which is only found on expensive workstation computers. With 10G Ethernet, customers get 10 times the speed of regular Ethernet. Plus most computers can be upgraded to add 10G Ethernet. Even when connected to an Ethernet switch with dozens of users accessing files at the same time. The Ethernet also features very low latency for fast access times. That’s similar performance to expensive business SANs but in a low cost design that customers can install themselves.

One of the big advantages of the Blackmagic Cloud Pod is that it’s private storage that customers fully control. There are no subscriptions to sign up for. There are no monthly license fees. There is no tracking of their usage or data. Customers don't even need to log into a web page to maintain the storage settings, because Blackmagic Cloud Pod uses a free to download software utility that runs on Mac and Windows. That means customers can run a private network, totally disconnected from the internet. This is critical for many security standards where computer networks cannot be connected to the external internet.

When customers need to change settings, customers can use the Blackmagic Cloud Pod utility that's available on Mac and Windows. In many ways, it plugs in just like a regular hard disk. That means it's so easy to setup, customers won't need an IT person to get started. However if customers want to customize their network, then the utility software lets customers change the network settings in the Cloud Pod. The utility also lets customers add Dropbox sync folders.

Press Photography
Product photos of the Blackmagic Cloud Pod, as well as all other Blackmagic Design products, are available at www.blackmagicdesign.com/media/images.