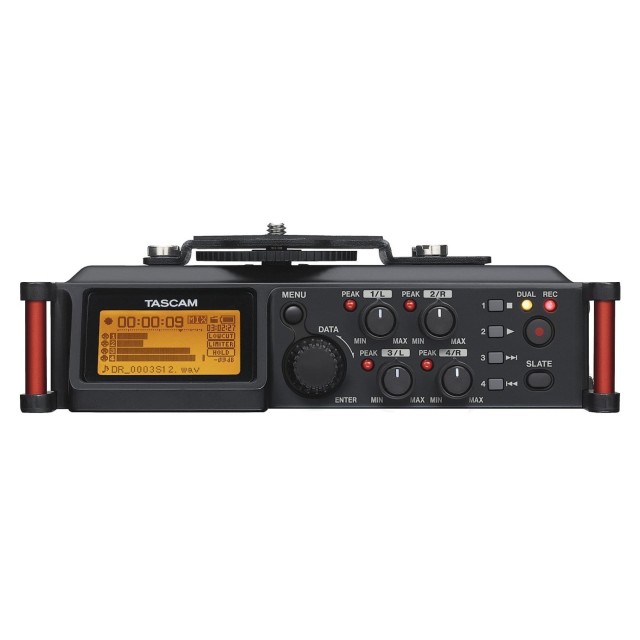 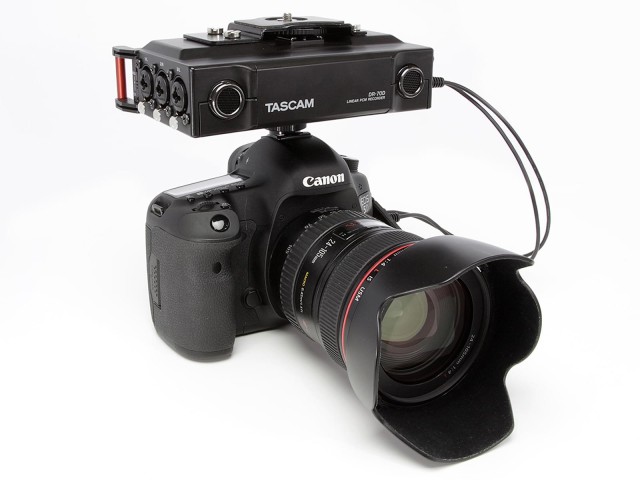 The DR-70D is a compact audio recorder that allows the aspiring DSLR user to create audio recordings in very high quality in parallel to their film or video shots. The recorder can be mounted directly between a tripod and the camera or on top of the camera, resulting in a compact package.

The DR-70D is a compact audio recorder that allows the aspiring DSLR user to create audio recordings in very high quality in parallel to their film or video shots. The recorder can be mounted directly between a tripod and the camera or on top of the camera, resulting in a compact package.

With its two built-in microphones, the DR-70D is instantly ready for use in standard situations. In addition, it provides four XLR/TRS combo jacks which can be used to record four channels of audio with excellent sound quality using professional microphones. Thanks to a camera output the recorder’s stereo signal can be recorded also on the camera to ease subsequent editing of the material in combination with the slate tone function of the recorder. On the other hand you can use the camera input to monitor the audio of the camera using the recorder.

Features of the DR-70D include overload-resistant, great-sounding preamps with switchable low-cut filter and limiter, handling of microphone signals in mid/side format, 24- or 48-volts phantom power for condenser mics, as well as many common and not so common functions that facilitate capturing, monitoring and subsequent processing of the audio tracks.

Two built-in microphones
The two omnidirectional microphones allow you to easily record natural stereo sound with just this unit. Used together with small shotgun mics, you can even record audio from people speaking in an interview and the ambient sound at the same time (on different tracks), for example, with a compact set up.

Built-in mixer with 4 inputs and 2 outputs
The mixer can take a total of 4 channels from among the four XLR inputs that support phantom power, the stereo mini-jack input and the built-in stereo mic. In addition to adjust pan and input level, this unit also offers a limiter, a five-setting low-cut filter and a delay that can compensate for distances between mics. Moreover, a mid-side decoding function allows the use of two microphones in mid-side configuration.

High audio quality through HDDA micrphone preamps
Mic preamps, which receive and amplify microphone input signals, have a large impact on the quality of the recorded audio material. The DR-70D uses Tascam original HDDA (High Definition Discrete Architecture) microphone preamps that we created through careful selection of parts. For example, we chose the NE5532 for the operational amplifier, which has a strong effect on audio quality. With a mic amp circuit that uses discrete architecture comprised of meticulously-chosen parts, we have achieved an equivalent input noise of −120 dBu.

The A/D converter that converts analogue signals to digital is made by Cirrus Logic and is equivalent to those used in our successful DR series of linear PCM recorders. Recording at resolutions up to 96 kHz/24 bit is supported.

Compact and tough design
The designer of the DR-70D focused on making the unit small so that it does not interfere with camera-work when it is attached to a camera support system or stabilizer. The unit has tripod screw threads on the bottom side and a removable camera attachment screw on its top. A hot shoe mount is also included so you can attach the recorder in the way most convenient for you by placing it between a tripod and the camera or on top of the camera with a hot shoe.

The camera output jack is designed to output the mixed audio to the camera so that the same audio can be recorded by the DR-70D and the camera. Since the input level varies by camera maker and there are usually few adjustments related to volume on DSLR cameras, this unit has an output volume dial that can be used to make adjustments.