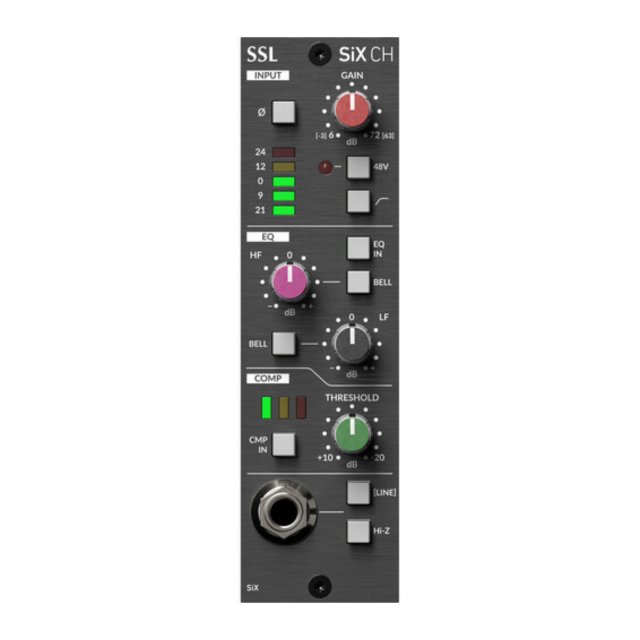 Infused with technology from SSL's SiX console, the Solid State Logic SiX CH is a single-channel 500 Series channel strip that offers a premium gain stage, 2-band EQ, and a single-knob…

Infused with technology from SSL's SiX console, the Solid State Logic SiX CH is a single-channel 500 Series channel strip that offers a premium gain stage, 2-band EQ, and a single-knob compressor for musicians and engineers at any level. Given its sonic versatility and modular form factor, the SiX CH is a stellar addition to home studio setups, mobile recording rigs, and racks in commercial facilities.

With up to +72 dB of gain available on the mic preamp, the SiX CH delivers bountiful boost for low-output ribbon and dynamic mics or even the quietest of sources. Of course, switchable 48V phantom power is provided for condenser mics. You can also keep the low-end power under control by activating the 75 Hz high-pass filter, which features a 12 dB/octave slope. Each band of the equalizer can be set to shelf or bell mode; different center frequencies are used for each mode to increase flexibility. The compressor utilizes variable threshold and automatic makeup gain to enable fast operation and consistent output level.

SiX CH is a single-width 500 Series channel strip using the SuperAnalogue channel processing features from SSL's SiX console including the mic pre, low- and high-frequency EQ, and the single-knob compressor.

SSL HF and LF EQ
SiX CH EQ is a classic SSL-style EQ with a gentle, broad-stroke design and high and low shelving filters at 3.5 kHz and 60 Hz (±15 dB gain range). Each band can be independently switched between shelving and bell curves. The bell curves change the center frequencies to operate at 5 kHz and 200 Hz, giving greater versatility from the two controls.

TRS Line Input
The front-facing TRS line input offers a convenient way to add instruments on the fly or use SiX CH as a feature-packed summing module. A 10-kilohm nominal line input impedance can be changed to 1 megohm via the Hi-Z switch. The 1-megohm impedance makes this input suitable for very high-impedance sources such as passive guitar pickups without the need for an external DI box.