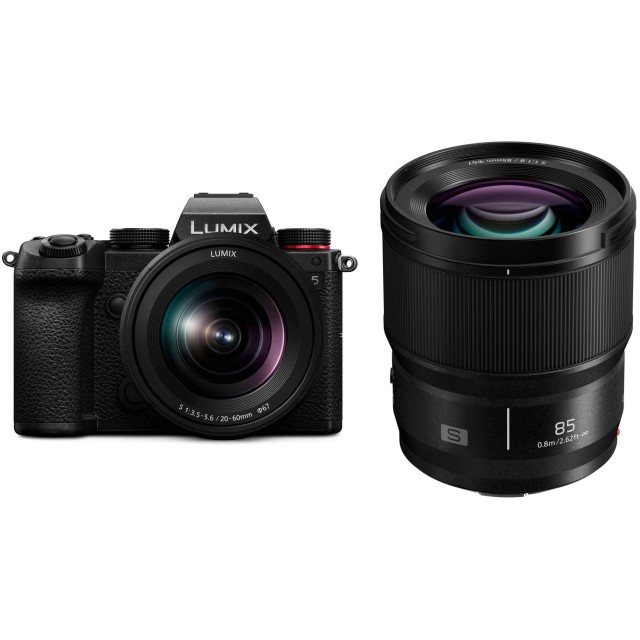 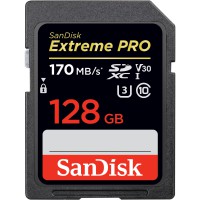 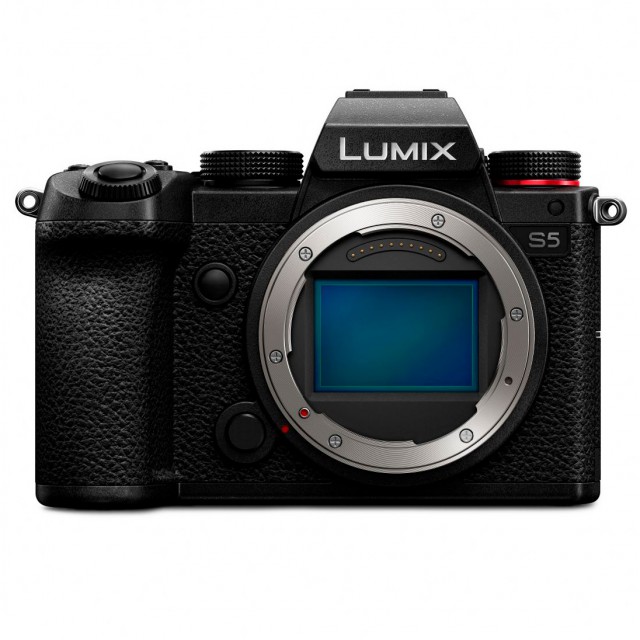 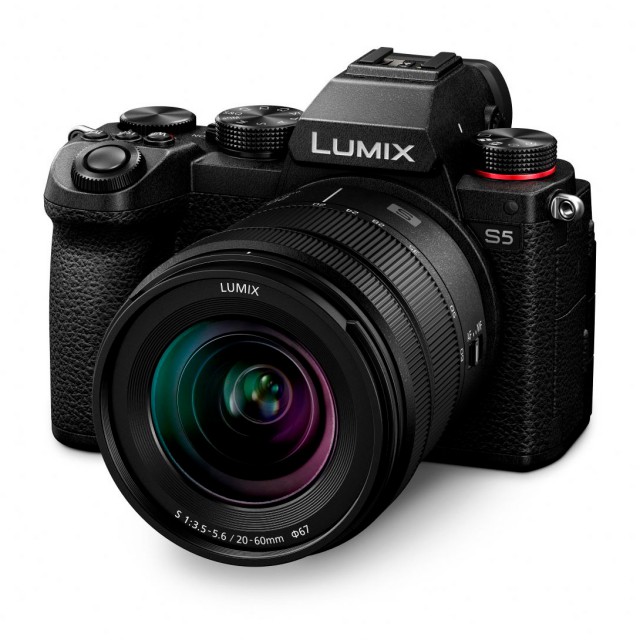 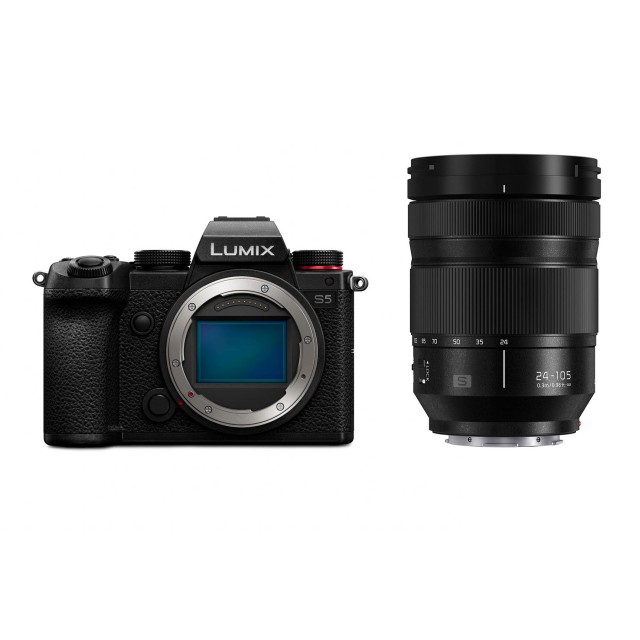 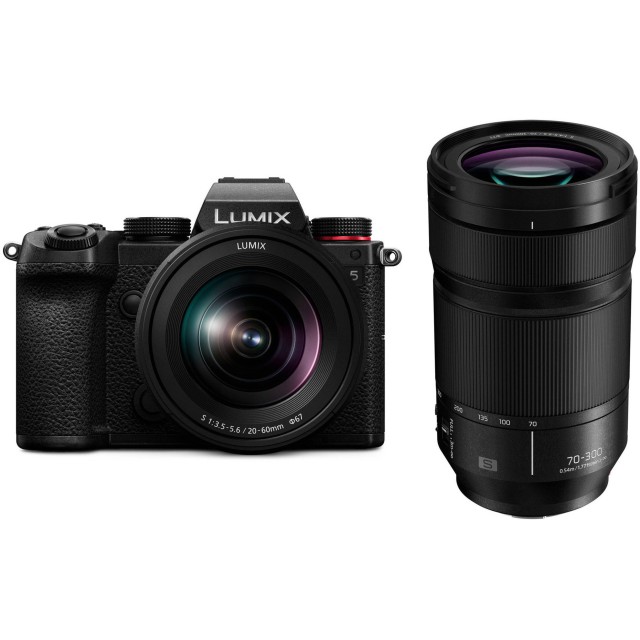 At the heart of the LUMIX S5 mirrorless camera is a 24M FF CMOS sensor that boasts a wide dynamic range and high sensitivity. Dual Native ISO technology significantly improves image quality, both in bright scenes and in the dark using extreme sensitivities up to ISO 51200. Panasonic's exceptional heat dissipation technology guarantees stable and long-lasting video recording. The LUMIX S5 offers a dynamic range of more than 14 EV, the same as digital film cameras, as well as a V-Log / V-Gamut profile taken from the VariCam series. A range of recording formats and modes are also available, including anamorphic, slow-motion, and time-lapse shooting in 4K at 60p and 4K HDR.

The LUMIX S5 also has the added benefit of innovative fast and accurate autofocus in both photo and video modes. Thanks to innovations in the focusing functions with real-time detection of subject type and parts, the device is faster and more accurate in tracking the human eye, face, head or body. The LUMIX S series also features Dual I.S.2 image stabilization technology, which is a combination of Body I.S. (five-axis image stabilization in the camera body) and O.I.S. (two-axis optical image stabilization in the lens). This stabilisation compensates very effectively for image blur, allowing you to work with up to
6.5EV longer exposure times. The robust and sealed splash-proof and dust-proof construction guarantees high reliability, which is especially appreciated by demanding photographers and videographers.

For more shooting and recording options, 96M High Resolution Mode (JPEG/RAW), Live View Composite and HLG Photo Mode are available. With high energy efficiency and a new high-capacity 2200mAh battery, this model can capture approximately 470 images (when LVF mode is activated) / 1500 images (in Power Save LVF mode). There's also the option to charge and power on the fly via the USB-C connector.

High image quality
The LUMIX S5 is equipped with a Full frame CMOS sensor with a resolution of 24.2 megapixels (35.6mm x 23.8mm). It boasts a wide dynamic range and produces sharp images with exceptional clarity and minimal noise -- and at a maximum sensitivity of ISO 51200. It's an ideal camera for use especially in low-light conditions.

The LUMIX S5 takes full advantage of its sensor's potential, offering a High Resolution mode that captures even the smallest details in photos with complete fidelity, saving them as beautiful, highly realistic RAW and JPEG images. When the sensor moves, eight images are automatically exposed thanks to in-body stabilization (Body I.S.), from which the latest version of the Venus Engine processor composes the resulting 96 megapixel (12,000 x 8,000 pixel) photo. This mode is suitable for landscape, macro, product photography and fine detail artistic photography. The ultra-high resolution images stand out especially when shooting landscapes or static subjects with a tripod.

With the motion compensation function, this mode can be used when shooting handheld and can also be used in situations where moving subjects are in the composition. The LUMIX S5 integrates Body I.S. (Image Stabilizer) in the camera body for powerful correction of shake and unwanted hand movements. Panasonic has developed an algorithm that accurately reads shake information from the gyroscope, image sensor and accelerometer. As a result, shake is better detected and compensated for, allowing you to work with 6.5 f-stops longer exposure times. Thanks to the combination of Body I.S. (5-axis stabilization) and Optical Image Stabilization (O.I.S., 2-axis stabilization) in the LUMIX S series lenses, Dual I.S. 2 is able to compensate for 6.5 f-stops. This comes in very handy when working with telephoto lenses and in less than ideal conditions: in low light or when holding the camera with only one hand. The five-axis stabilisation works in both photo and video modes, including 4K recording. Body I.S. compensates for movement even when equipped with a lens without optical stabilisation.

With the new Live View Composite feature, the camera releases the shutter at specified exposure intervals and combines high brightness portions into a single image. While shooting in B (Bulb) mode adds up the total brightness of each successive frame, in Live View Composite the camera detects only the target subject, the bright parts of the image, and the user can combine them in a live view at his or her discretion. This is useful for capturing shots of fireworks or stars in the night sky where the background does not need the gain boost.

Video recording
The LUMIX series, the pioneer of hybrid mirrorless cameras and camcorders, offers the widest selection of models capable of recording 10-bit 4K video. As the newest member of this family, the LUMIX S5 can record 10-bit 4K internally at 60/50 sn/s with 4:2:0 colour sampling and 30/25
sn/s at 4:2:2 colour sampling, also in 4K quality and up to 30 minutes in length. There is no time limit for 8-bit 4K recording.

The LUMIX S5 offers a dynamic range of more than 14 EV, almost the same as Panasonic film cameras. As a result, it is able to faithfully reproduce scenes with an extreme range of brightness and shadows. The ability to capture accurate colors and true-to-life skin tones is a must for any filmmaker.

The LUMIX S5 comes with a free download of 35 LUT corrections for VariCam film cameras. It is easy to match the color tone with the footage recorded in V-Log S1H / S1 and V-Log L on the GH5 / GH5S. Handy measurement tools such as Waveform Monitor and V-Log View Assist are also available.

For smoother sequential shooting, there is a 6K FOTO5 function that captures the most precious moments at 30 fps by selecting the best photo from the entire 6K series (in 4:3 or 3:2 aspect ratio). The resulting high-resolution image is approximately 18 MP in size.

Fast and highly accurate autofocus
The LUMIX S5 boasts very fast and accurate autofocus for both still photography and video recording. The combination of Contrast AF and Depth From Defocus (DFD) technology focuses on the target in approximately 0.08 seconds
offers superior -6 EV brightness detection and Low Light AF with enhanced sensitivity thanks to optimised sensor tuning. Combined with the LUMIX S series lens, users can take full advantage of the maximum sensor-to-lens communication speed of 480 sn/s.

The LUMIX S5 also incorporates state-of-the-art AI technologies that detect specific subjects - people and fast-moving animals, including dogs, cats and birds. In addition to the human eye, face and body, real-time detection can now detect the human head for even more precise focusing. The camera continuously tracks a person, even if they are moving quickly, turning their back to the lens, tilting their head or moving at a greater distance from the lens. Improvements to DFD technology have also improved the performance of the AFC, which also allows users to track small or fast-moving subjects and capture them in focus whenever the shutter is pressed.

Mobility and ergonomics
The LUMIX S5 boasts excellent mobility, reliability in basic functions and expandability. To stand up to the toughest conditions, its body is made of magnesium alloy and is splash-proof and dustproof. Thanks to the optimal arrangement of heat-distributing components, individual parts do not overheat, so the LUMIX S5 can offer long video recording without time limitations.

The 3" 3:2 LCD selfie monitor with a high resolution of 1,840,000 pixels is touch-operable. Shot composition in a variety of popular aspect ratios, such as 16:9, 4:3, 1:1, 4:5, 5:4 and 9:16, can also be controlled during recording using masking frames. Thanks to the distinctive REC Frame Indicator, you will always be able to see whether recording is in progress or not.

The LUMIX S5 has two SD memory card slots - one slot for UHS-I format and the other for high-speed, high-capacity UHS-II (Video Class 90). The high energy density battery can also be recharged via USB.

Compatibility with Bluetooth 4.2 (BLE: Bluetooth Low Energy) allows constant connection to a smartphone or tablet with minimal power consumption. LUMIX S5 settings can also be copied and wirelessly transferred to other S5 cameras if you have multiple cameras. In addition to 5GHz (IEEE802.11ac) Wi-Fi, the camera also supports 2.4GHz (IEEE802.11b/g/n) standards, offering a secure and stable connection anywhere in the field for seamless remote control and high-speed data transfer.

Optional accessories, software
Various accessories are offered for the LUMIX S5 to enhance its usability and ease of use. The external microphone adapter (DMW-XLR1) is pluggable with XLR connectors for recording high-quality stereo sound. With the battery-operated vertical grip (DMW-BGS5), you can shoot approximately 940 frames (in LVF mode) / 3000 frames (in Power Save LVF mode) thanks to the extra battery that is hidden inside. Other accessories such as a remote shutter release (DMW-RS2), DC coupler (DMW-DCC17) and handgrip/tripod (DMW-SHGR1) are also available.

The LUMIX Tether application software allows control via USB. Tethering also allows you to instantly view the image on a large computer screen. If you want to broadcast live, you can also use LUMIX Tether for streaming in combination with the LIVE VIEW function.

The LUMIX Sync app for iOS/Android devices lets you transfer photos to your smartphone or tablet and remotely control them with an easy wireless connection.